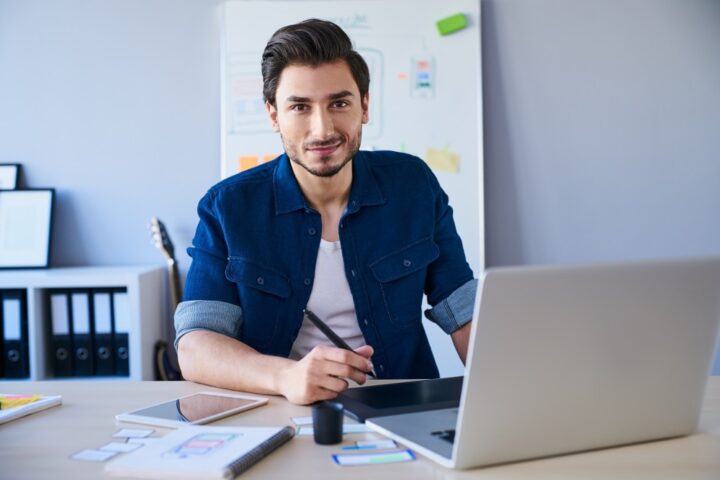 Sometimes all it takes for us to recognize a brand is one look, one simple glance at its logo. That’s the power of a brand logo; it literally can make or break a brand. There are great stories, big dreams and creative minds behind the logos of the biggest brands in the world today and every great brand logo tells a story of its own. Here are just 5 world famous brand logos and the story each of it connotes.

“Simplicity is the ultimate sophistication” – few brand logos resonate this statement quite like Amazon. Like many other brands, Amazon didn’t get their logo right straight away, but kept persisting till they did.

The Amazon logo we all know today was introduced in 2000. Featuring a woodmark of the name of the brand, there’s one simple design element that distinguished the brand: a smile made out of the orange arrow spanning from ‘A’ to ‘Z’. This was aimed to hint that the store has everything from ‘A’ to ‘Z’ while putting smiles on customers’ faces.

Arguably the most iconic symbol in the sporting world, the Nike swoosh was designed with the aim of introducing a simple logo that conveyed motion & speed. Carolyn Davidson was the creator of the world famous swoosh we all know today, deriving inspiration by the wing of Nike, the Greek goddess representing victory.

According to Greek Mythology, the Swoosh is the giver of immense power and motivation to warriors; making this a perfect logo in a sporting context. Here’s a fun fact,Nike co-founder Phil Knight initially wasn’t too fond of the logo saying “Well, I don’t love it, but maybe it will grow on me”. It sure did grow on the rest of the world, and that’s a massive understatement.

Subtle, yet brilliant. The Fedex logo is one of the most easily recognizable logos in the world, be it attributing to its colours, font or even spacing. In fact, the brand has been lauded for its effective and clever use of negative space, winning over 40 design awards in total.

One of the most important elements of the logo however, is a hidden one. The hidden arrow between the ‘E’ and ‘x’ brilliantly connotes everything the brand stands for: forwards direction, speed, and precision. Talk about matching your logo and your brand values!

One of the world’s most popular FMCG brands, Unilever’s logo at first glance looks rather straightforward – the letter ‘U’. However, there’s a deeper story to it.

If you zoom into the logo and look closely, you will see the ‘U’ is made up of various different symbols – 25 of them to be precise. Each of these logos represent Unilever’s sub-brands or corporate values. “Unilever is committed to making sustainable living commonplace and our logo is a visual expression of that commitment. Each icon has a rich meaning at its core, and represents some aspect of our effort to make sustainable living commonplace”, the company states on its website.

Google has pretty much become synonymous with ‘search’. It has grown incredibly over the years but have you ever wondered the story that its famous logo denotes?

An incredibly recognizable logo worldwide, Google’s logo hints that they don’t play by the rules and are all about having fun. The colour palette of the logo is visibly constructed with all primary colours, except one rogue ‘L’ that symbolizes the fun nature of the brand.

It’s clear that every logo stands for something and tells a story. Sure, there’s a great deal of strategic thought in creating a logo that would make an impact but ultimately like most of the world’s iconic brand logos today, the story a logo tells makes it all the more memorable.