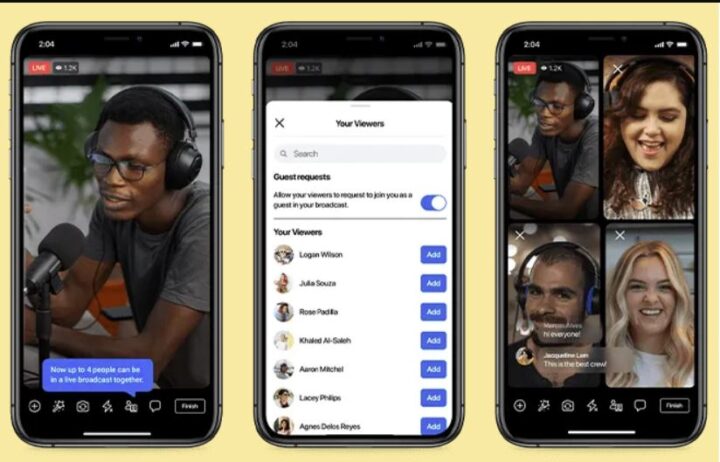 This holiday, Facebook is launching new tools to maximize the opportunities for creators and help them build their community during the break.

On December 9th this year, Facebook has announced a range of new features to be launched just for creators. It’s a new design for Facebook Live to ease tasks for creators to go live. The update includes featured links in live-stream broadcasts, new means to connect and interact with fan comments, additional funding features for rising celebrities, guest chats, new follow recommendations, and much more.

The new style to access the live-stream options available within the composition process is much easier to navigate through. Plus, more engagement features are on their way from Facebook. Keep reading to know more.

The features links are introduced to enable live streamers to share third-party websites to bring in more traffic to their content. “From beauty blogs and donations to causes you care about, creators can add a featured link to their live broadcast, and viewers can visit these links without leaving the live video”- Says Facebook.

The live-stream poll is also now available on mobile apps which were available only for desktop creation initially. This is another tool Meta has announced to allow creators better engage with viewers.

The co-broadcasting is also another update introduced to go live with up to three additional guests, which we would say is a big selling point compared to the rest. The “Live with” option was available back in 2019. But this was removed due to lack of use and the cost of maintenance.

However, after the pandemic, the rise in video connection has increased massively, reigniting the interest of the creators in the feature. Facebook seeks to turn this opportunity to their favour by bringing the feature back with more new details.

A new Front Row experience is also to be introduced for most devoted viewers of a creator to show them on the “Front Row” section of a live broadcast where creators can give shout outs.

Moreover, the most loyal fans who support creators via Stars, donations and more are also motivated with badges to distinguish them from the rest.

“We’ve also introduced improved comment ranking features that help creators find and engage with the most relevant conversations including, elevating comments and replies from creators to the top of the discussion thread on a post and decreasing the visibility of repetitive comments.”

This feature, as per Facebook, will help fans find conversations where the creator is engaged, which could create more discussions around the content. The platform is also looking to highlight live creators through some new units in the News Feed which will be recommended to users based on their interests.

Finally, Facebook also announced its new “Spotlight Conversations” post option that would include two comment tabs, one for those mentioned in the chat, and the other for all other comments.

A new bonus program is also introduced for Facebook Live creators to pay eligible creators based on the performance of their live broadcasts to encourage more creators to turn towards Facebook instead of TikTok. Nevertheless, if creators start streaming relying on such funding, Facebook will risk losing them if reduced. Eventually, Facebook has to find a replacement mechanism to phase it out at some point.

Thus, on the overall, there is a lot of new things Facebook creators need to consider to enjoy all its benefits. The bottom line of all these incentives is to win back the younger generations from TikTok by attracting their top creators and celebrities first. The platform hopes that these additions will be more tempting compared to its rivals. They believe they could win over creators and thereby win back the audience. Is what Facebook dreaming on will ever become a reality? Let’s wait and see.

With all-new trends coming in, if you are looking for your brand to shine in the digital arena, Contact the experts at Seven Media via 076 629 0442.